Well, here I am with a *UFO that is finally finished! I began this nine-patch block a year ago and then just set is aside and forgot all about it.  Then I heard about the Black Tie Boogie  chicken themed, blog-hop and just knew I had to participate!

So, after all this time, I resurrected the little Rhode Island Red.  She was constructed from some scraps I had left over from the first full-sized quilt I made.   I framed her in a half-inch border of red batik, followed by a two-inch border of brown batik.  Then I began the hand quilting, and binding, and now she’s done!

Hint:  Clicking the first photo will take you into the carousel for a closer look!

My little Rhody looks fine hanging on the wall.

Her comb and wattle are needle turned applique, and stuffed.

She has a secret on the back. A zipper!

I couldn’t resist sharing this one last shot with you. I think she looks like stained glass!

Please don’t forget to visit all the other lovely quilting ladies in the hop today!

Thank you Vicky of More Stars in Comanche  and Madam Samm of Sew we Quilt for hosting this blog-hop and for making me feel comfortable to join into all the fun!

Don’t forget!  You can click below (now through the 29th) to see who’s up next in this Poultry inspired blog-hop!

I’ve read that roosters, for the most part, have had the proper protocols bread right out of them when it comes to courtship.

You see, when the rooster wants to get amorous he is supposed to dance in a circle around the hen and drop one wing like a fan touching the ground.  To my mind a polite rooster looks quite a bit like a Matador.  Now, if the hen is interested, she will drop down and wait… 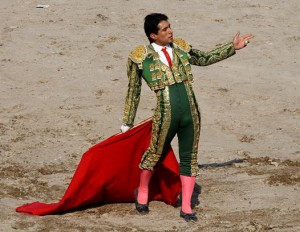 I am certain that Topper must feel every bit like this Matador.  Can’t you just hear him?

Topper: “Hennies, am I not handsome and irresistible?”

This morning he gave the Little Red Hen his best Matador impersonation and instead of the expected drop, she puffed up as if in scorn, and fiercely chest butted him! 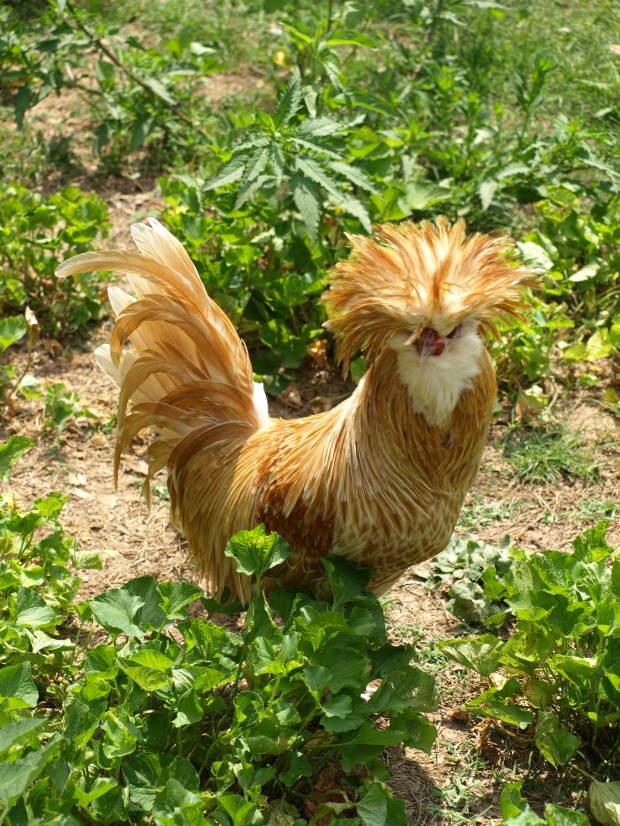 Personally, I think he is a spectacular specimen of a Laced Buff Polish Rooster, but even Tippy won’t have anything to do with him and she’s a LBP hen!

So, even with his good looks and suave demeanor, he just gets no respect out there in the chicken yard.

I found a bit on the *chicken’s mating behavior (if you are really interested to know more) but it is very technical –> HERE.

*Everything else was about Prairie Chickens.